The True Red Book of Appin 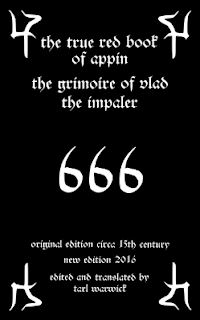 PURCHASE HERE
As a slightly amusing aside to the my (growing number of) readers I hereby offer this little book to the world; the True Red Book of Appin, the grimoire of Vlad the Impaler, the grimoire of Empires.

It is quite possible that the more astute reader, having studied the concept of steganography, will fully understand the nature of this work- for others, it serves as a particularly well designed occult work which will allow the reader to delve into some of the Renaissance-era folk traditions of not-quite-civilized Europe.

In the not so distant past others have released work in the mighty name of Vlad Draculea and attempted to convince people that, somehow, he was a demonolater or a devil worshiper despite his rather deep Orthodox spiritual leanings and his great pride in the title "Son of the dragon", taken from his father, who was quite literally part of a secretive and elite force of Orthodox Christians gathered together to stave off the invasions of the islamic world in a time when the Ottoman Turks controlled a land area greater than that of their Byantine predecessors and essentially as great as the Eastern Roman Empire before it went into decline. It didn't help that Vlad and others were still fighting with swords and crossbows well into the period of cannons and gunpowder.

Nonetheless, one cannot easily separate Renaissance era spiritual Christianity from the occult, because indeed the two were inseparable altogether; from the laypeople and peasants practicing folk magick to the royals, nobles, and clergy with their more elaborate ritualism.

The reader may determine for themselves the nature of this work.
Back to News
Use left/right arrows to navigate the slideshow or swipe left/right if using a mobile device