The Stanzas of Dzyan: Now Available! 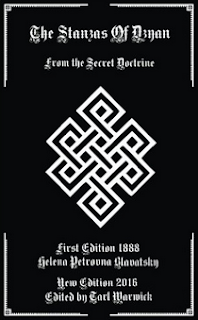 CLICK TO PURCHASE
The Stanzas of Dzyan are a short, purportedly Tibetan work which Helena Blavatsky claimed to have translated near the end of the 19th century from works she encountered in the far East. That it is essentially a short reworking of mundane Buddhist doctrine does not detract from the fact that this, above almost all other occult manuscripts, influenced the entire period of Victorian new agery- as such I decided to edit it, more as a work of historical rather than spiritual significance.

Helena Blavatsky was an interesting person; a chain smoker with the mouth of a sailor who indeed did travel far more widely than even the average socialite Victorian of her era; that she fused systems together into new rites and practices is generally seen as evidence of her being a fraud by most- I see fraud only in her seances and secret letters and relegate the fusion of systems to the most positive abandonment of moral traditionalism and the adaptation of what a hundred years later became the rudiments of the new, rising occult order which at least acknowledges the presence of each spiritual system outside of a vacuum.

26 pages.
Back to News
Use left/right arrows to navigate the slideshow or swipe left/right if using a mobile device