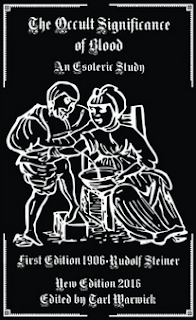 CLICK TO PURCHASE
This is Steiner's greatest addition to the corpus of occult literature. I am myself generally dismissive of theosophical and anthroposophical works, but "Occult Significance of Blood" goes deeper, far deeper, into philosophy than most contemporary booklets including others Steiner himself crafted; the only other similarly fine Steiner work I ever read was "The Ahrimanic Deception."

This text delves deep into the meaning of blood in both a strictly spiritual as well as (vaguely outdated) biological context. Filled with eugenic thought, Steiner's work here does not argue against outbreeding like many contemporary works and instead credits and lambastes it as a double edged sword a la Paradise Lost and the simultaneous liberation and downfall of human order; while exogamy, according to Steiner, gave man his true self thought and identity, it robbed him of a primordial lineage memory of sorts as it altered, forever, man's thinking abilities. Such material would later form the basis of many a nationalistic attempt to restore tribal memory and overlap it with modern consciousness, forming a divine intellect and godlike man who could never be thwarted.

34 pages.
Back to News
Use left/right arrows to navigate the slideshow or swipe left/right if using a mobile device