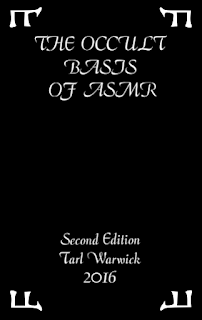 CLICK TO PURCHASE
The second, entirely reformatted, slightly expanded second edition of "The Occult Basis of ASMR" is now available.

When I realized that the phenomenon known as "ASMR" (autonomous sensory meridian response) had multiple points of overlap with the spiritual world, I set out to write a work on the topic. Originally in a slightly poor choice of formats, it had to thus be re-edited and two new sections were added along with a longer foreword to explain the basis of the work. Thus, this second edition has been released. Those involved with ASMR should appreciate the work; it doesn't just talk about the prevalence of witch roleplay or occult imagery within ASMR videos and sonic releases, but the pagan basis of sonic occultism, the role of the famed serpent fire, and the processes of lucid dreaming, meditation, and much more.

60 pages.
Back to News
Use left/right arrows to navigate the slideshow or swipe left/right if using a mobile device