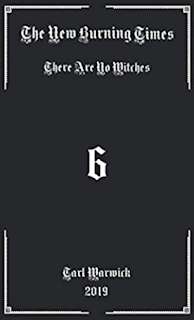 CLICK TO PURCHASE
As we say farewell (or good riddance) to the 2010s and prepare to enter the twenties- which I hope will be filled with flappers and art deco- it is time to release the final work of the decade. I literally got the idea a couple days ago when the news broke about the usual miscreants of the furthest "left" whining about extremist hand signals among army navy cadets- a tale told over and over by the modern day zealot authoritarians which peskily bother everyone else because of their own opportunism, fear, and boredom. The 2010s are significantly similar to the witch trials- the ignorance, false appeals to authority, self evidence of the claims, and culpability of the public that stands by and does nothing as their fellow humans are intellectually abused- it's not with joy but with sardonic observation that I crafted this little booklet.

These days more and more material is rendered proprietary and temporal by convoluted and obviously ill-omened contracts and hardware in computer systems. A computer ten years ago was mainly designed for local storage, able to connect to a broader network. Now, a computer is designed for exterior storage with a few internalized apps to communicate with it. This inefficient concept only exists because tech firms and their cronies wish to "own" all material and snuff it out at a Stalinesque whim.

As always I am 100% opposed to all censorship and all ignorance- todays "activist" haranguing about "extremism" on the internet is no less stupid and evil than some man in a long wool cloak with a copy of the Malleus Maleficarum centuries ago. It's the same superstitious nonsense, the same abuse as before.
Back to News
Use left/right arrows to navigate the slideshow or swipe left/right if using a mobile device