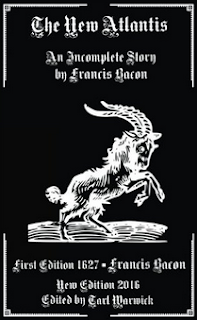 CLICK TO PURCHASE
This work by Francis Bacon was left incomplete in a fairly obvious nod to Plato, who similarly forsook his own tale of Atlantis mid-sentence, possibly for effect. Bacon's work here is notable in the occult sense for two basic reasons.

First; the work dwells primarily on the spiritual character of the mythical people of Bensalem and a few of their rites, and might be ascribed as an allusion to how christian society ought to operate much as Plato's account is often seen as a description of how classical society should do the same in its era.

Second; Bacon speculates on technology and arranges it in such a way that he is almost making a series of predictions of what man would eventually be able to do; on most counts he was not only right but spot on- from the development of smokeless gunpowder and human flight, to advanced optics and microscopy among other things.

The entire work is delivered in such a form that it may be said to have alchemical overtones as well, dwelling on the very same processes of purification (in a mundane sense) that alchemists ascribed to their own practice.

46 pages.
Back to News
Use left/right arrows to navigate the slideshow or swipe left/right if using a mobile device