The Ideals of Theosophy: Now Available! 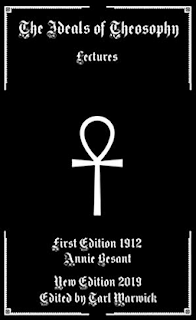 CLICK TO PURCHASE
This work is quite a notable one, being written by Besant- one of the foremost theosophists of the movement, and once-adoptive mother of Krishnamurti himself. It contains a series of four lectures, two of which are basically about socio-political issues- these two are quite interesting because the criminal and societal reforms spoken of were indeed largely adopted by western nations after this era- for example not trying children as adults in the same legal framework for any but the most significant crimes, and preventative justice of several sorts.

While Besant was initially a political activist and socialist she later became interested more solely in spiritual matters; this work represents the step in between the two and shows her interest (waning as it was) in civic matters seeping into her religious philosophy. Works of this type helped to shape modernity in all its forms.

74 pages.
Back to News
Use left/right arrows to navigate the slideshow or swipe left/right if using a mobile device