The Biography of Satan: Now Available! 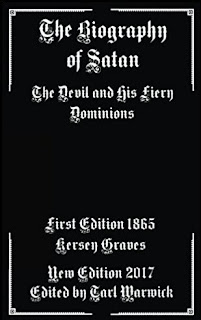 CLICK TO PURCHASE
This work comes courtesy of the spiritualist movement of the mid and late 19th century. It is at once an academic work, a work of general demonology and Satan-lore, and a social tract aimed at the fire and brimstone preaching of its era. The elaborate synthesis of its sources and its authors' opinions make it an important work within the historical cycle of late pre-modern Christian philosophy.

For those interested in the occult, the practice of magick, and demonology in a stricter sense, this work is best seen as a refutation of some of the symbolism and meaning used by those involved in the same; if the basis is unsound the practice is unsound, and a great many practitioners continue in the delusion that brimstone-and-smoke filled hallways populated by leathery little creatures with Pluto-esque pitchforks are very much real, and that Satan is a historical notion as opposed to one adapted from paganism. I strongly suggest this work as well for anyone desiring to rid themselves of the fear or Hellfire, since it is meticulously debased here and more or less totally defeated.

112 pages.
Back to News
Use left/right arrows to navigate the slideshow or swipe left/right if using a mobile device