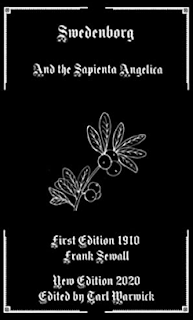 CLICK TO PURCHASE
This intermediate-length text is essentially three short works in one; the first third of the work is an autobiography of Emanuel Swedenborg and the second a brief overview of some of his more important works. In both, there are bits of his overarching philosophy listed and described briefly. The final section is a fairly lengthy bibliographic appendix listing both his works and the works of those about him available at the time.

The man himself is rather an enigma; he began receiving religiously themed visions and dreams and abandoned secular philosophy, inventing, and basic science, in favor of theological and spiritually philosophical work, which he wrote profusely. A small religious sect has sprung up around his teachings (which adherents appear to regard similarly to how Mormons see Joseph Smith.) His detractors consider Swedenborg to be either opportunist or madman. However, his genius cannot be denied; he developed the basic idea of neurons long before modern studies of the brain and was notable in his engineering finesse.

86 pages.
Back to News
Use left/right arrows to navigate the slideshow or swipe left/right if using a mobile device