Sickness In Hell is Available At Last: Sound the Horns of Hell! 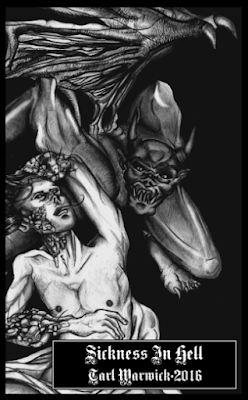 CLICK TO PURCHASE
At long last, after nearly a solid decade of writing, editing, and shelving the project altogether for months or years at a time, my earliest literary effort, Sickness in Hell, is finally available.

Some of the content has changed over time as I fiddled with what was originally a scattered plot; the names of the main characters involved (including, of course, Satan) have remained the same. I've also decided to make at least two sequels and make it into a series of splatterpunk/dystopian works.

It follows the story of Germaine Woodsworth as his world is crumbling underneath him in a fantastical fungal plague which is tearing the established order apart. Witchery, demons, sickness and decay, are everywhere- reality itself melts away in these pages in hopes that the sanity of the reader will subsequently also begin to decay.

It should be noted that I wrote what has become this work under the inspiration of forces, possibly of a demonic nature, which inspired me to do so many years ago. For anyone into the spooky, the dark, the darkly satirical, or the demonic, you've just found the ultimate in grotesque experiences. Helpfully, it's about two weeks before Samhain right now so you should be able to really get into the mood of the season.

224 pages.
Back to News
Use left/right arrows to navigate the slideshow or swipe left/right if using a mobile device