Regarding A Few Anonymous Critics of my Editing

by Styxhexenhammer666 January 05, 2017
This post is partially an exercise in humor because those who have some degree of understanding of how the editing process works are already acutely aware of the work involved with releasing even already-written materials whether from an ages-old book or an ages-old book that was scanned into a pdf and then used as source material. In the last few weeks, a few (anonymous) individuals both on Youtube and elsewhere have attempted to insinuate that my releasing of edited works by other authors does not constitute work, or at least it that it doesn't constitute difficult work that, in their minds, could not be adequately done by any other average person. I doubt that these same individuals would be willing to confront me without anonymity, likely because they know that their tall tales would be mocked by even a half-assed English student.

I need to point out here first that my editions are physical softcover books and not pdf files. I have already stated that I do not personally endorse the selling of digital books and wish they were all free; I would not even sell ebooks if people hadn't constantly asked me to. Anyone claiming that I simply sell the same material "available on (insert site here)" is fooling themselves. Sure, you can read for free at the library- and that's great, but unless it's a very large library (or a specialized one) their occult section is likely limited to the Necronomicon and some Crowley works.

I have made one thing clear before; the major difference between my editions and competing editions within the same occult categories are twofold.

1. My works are edited by hand line by line. Other works are often facsimiles (exact replicas of old editions) or are slapped into a file and published without substantial editing.
2. My works are still usually the cheapest and when they aren't they're about the same price as the cheapest editions. Anyone claiming I take people for a ride hasn't done any price comparison.

Now then. Let me take you through the steps required for the three general types of work you will find on Amazon within the occult outside of modern editions:

For a facsimile, you scan the work (or obtain a scan of a work) and copy each page as an image into a word or pdf file. You then publish it. You are now essentially done with the work once the info is entered. The result will look like literal crap no matter how you accomplished this task.

For a crap edition, you use OCR on a scan or a pre-existent text file from a work and paste it into a word file. You probably make some attempt to make the format halfway decent. You then publish it. You are now essentially done with the work once the info is entered. The result will be readable but probably badly formatted and will look like it was cobbled together by a gibbon on crack cocaine.

For an edition like the ones I craft you can either take a book and start copying it line by line, correcting all mistakes, correcting for archaic language (for instance, thou to you, or chymicall to chemical) until you have replicated the entire document as though you yourself wrote it, or you can take a scanned document and basically do the same thing. Sometimes, it's possible to copy blocks of text and edit them which is a bit faster. But wait! What about documents that aren't in a proper format? Well, then you have to copy it line by line anyways just as though you were holding the book in your hand. And even if you manage to find a work in good enough condition to be copied paragraph by paragraph, this doesn't negate all errors in format, nor does it transfer some characters, nor does it necessarily mean spacing and format is proper. Regardless, you'll be fiddling with spacing, format, and grammar. Unless you have a (very) good vocabulary you're doomed (read; 95% of the population is not capable of editing 18th century old English. I'd be surprised if more than half could even read it. Don't even get me started on far older English.)

But wait, there's more! I also format the covers myself! Some sellers slap a scanned image of the cover of the original copy onto a pdf and upload it- which is funny since this often leads to people thinking that a softcover book is actually leather bound or in a cloth wrap. I don't have that problem. I also illustrate internally when necessary. Of all the things I do involved with editing this is probably the only point I concede to my critics; my artistic capabilities are limited.

There's also more though! A lot of book sellers on Amazon aren't single individuals, they're publishing houses or groups of individuals that do this for a living. Considering my own income selling copies at often substantially lower prices (and thus a lower level of income per copy sold) I estimate that some of the larger firms dealing solely in facsimiles make five figures a month easily. I am effectively competing not with individuals so much as corporate firms most of the time.

"But aha Tarl" some may say. "OCR is your friend, you must chuckle as you greedily rub your hands together using it and pretending this is work."

"Not remotely." I reply, waving my hands forth to reveal a crumpled document. "Take a look at this following picture from the Canadian Herbal. We'll OCR it and see what gets spit out." 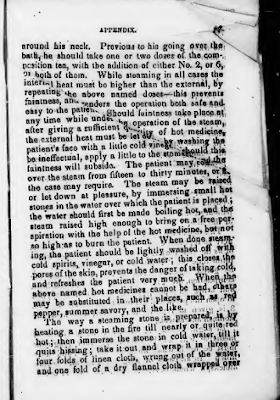 And now the OCR result:

The fact that a great many pages in a great many scanned manuscripts are in this condition or nearly so entirely negates the usefulness of optical character recognition. Indeed, it's faster for me to type such a page from scratch than to correct all the errors. If I were less scrupulous I'd take that image along with images of the other pages, slap them into a word file, and be done in an hour with the entire document along with a title page and a cheaply made nearly blank cover.

It also bears note that I am not just an editor- I'm also an author. I've written a number of works myself.

To make a long story short, anyone claiming they can do what I am doing is, statistically speaking, probably lying, and if they are capable of doing so, and have done so, chances are they aren't the ones pretending the process of editing pre-20th century occult works is so easy a simpleton could accomplish the task. Unfortunately it is very unlikely that my critics will read this; odds are they're just frustrated at my political or spiritual views and seeking to shill, or that they're illiterate.
Back to News
Use left/right arrows to navigate the slideshow or swipe left/right if using a mobile device