Psychedelic Spirituality; The Revelation Is Nigh! 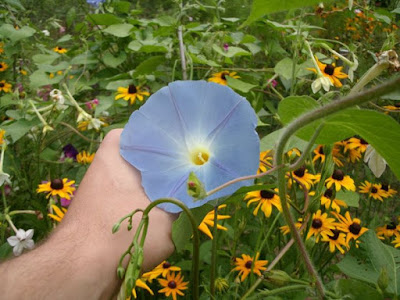 The completion of"Psychedelic Spirituality" is now at most a couple of weeks away; but that's not all that's on my plate at the moment; thankfully the new laptop I'm using (which was crowdfunded by my youtube subscribers) is faster than before, and while formerly handling completed texts with large embedded images was a bit of a hassle- saving the files took a good thirty seconds towards the end and had to be done locally and on removable media- the new processing power I have at my disposal makes everything a literal breeze.

First, I must edit and complete art work for the book as well as complete the final section, which I added literally this morning and half completed when all other work was done; essentially a list of about forty of the most common psychotropic species, along with their scientific names, general habitat, and their noted effect upon the human brain and body. While this is my main work at hand for the immediate future I've already begun working on the introductory chapter of the long-awaited Sickness In Hell and a second Morbid Stories. I've got several other ideas for works to begin this year also, and hope to finalize at least two after Psychedelic Spirituality by December.

Additionally, I've decided to return to editing and releasing new versions of old, out-of-copyright occult works; I have only scratched the surface of popular grimoires from the Renaissance through the Victorian era, and those are selling like hot cakes because demand for black magic is at an all time high. With any such work, editing is the easy part, it's the forward and artwork which takes some time; because I insist upon doing at least topical research on the subject, and the art needs to be of at least decent quality; which is all I can achieve with my own means and programs.

This is one of three planned works I have in mind for the topic of psychedelia; there's already a possible fourth, though, that I may write; I'll say no more as I do not want anyone else to preempt me on the particular subject I have in mind.
Back to News
Use left/right arrows to navigate the slideshow or swipe left/right if using a mobile device