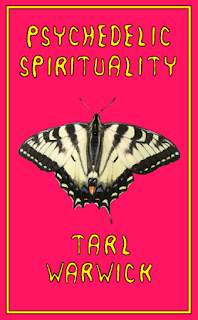 After some weeks of editing and making sure all the included photographic images were properly formatted, the day has finally arrived- Psychedelic Spirituality is now available on Amazon!

This is my first full length foray into the world of psychedelia, prohibition and temperance, moralism versus hedonism, and similar topics, covering not merely (as many works do) a laundry list of substances and their effects, or otherwise merely a philosophical guide with no encyclopedic content, but rather a fusion of the two; I rushed out the release of the far shorter Spirits of the Garden as a sort of teaser for this work to come.

I decided it would be prudent here to merely include the chapter list and brief content description for each.

I. Ancient usage of some psychotropics
Substances used in ancient times, and why

II. The failure of prohibition and why it failed
Specifically, the function of the underground or suppressed free market, coupled with innate curiosity

III. Machine elves and vibrations
Some of the standard visions and theories on psychotropics currently extant

IV. Some common psychedelics
A more in depth description of some of the better known substances

V. Psychedelics as portals to other worlds
Quantum physics and philosophy

VI. My own experiences with some substances
Specifically morning glory and Amanita muscaria among others

VII. Prohibition encourages more harmful, synthetic alternatives
The rise of the synths and why we should be trying to stop it

IX. Fungus, caves, and other phenomena
Notes regarding some of the more prevalent archetypes of psychotropic mythology

X. Spiritual seeds: morning glory heaven
The benefits of some psychedelics, or lack of risk thereof usually associated with them by some cultures

XI. The Noble Savage mythology; how modernity views its own use and that of the so-called primitive man
An exposition on the use of drug or similar imagery in film and television and its extension of romanticism

XII. Conclusions
A wrap-up of basic points formerly made
XIII. Psychedelic species of note
Brief descriptions of various species
Back to News
Use left/right arrows to navigate the slideshow or swipe left/right if using a mobile device