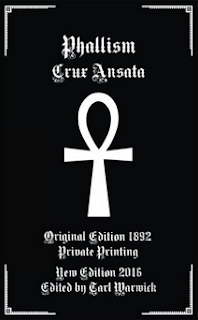 This work is wonderfully well crafted- not simply fixating solely on phallic worship in the most literal sense, it also describes the typical pagan origins of the christian cross, the phallic inclusions into then-modern christian, jewish, and islamic architecture, and describes the rituals of Hinduism, Mesoamerican natives, and others with regards to the phallus.

A counterpart to Cultus Arborum and other works, and released by the same private printing firm, this Victorian work was created at the height of the British Empire and thus fixates predominantly (but not exclusively) on cultures studied by explorers, soldiers, and academics from therein. Its common debasement of paganism as debauchery when connected to phallism is relieved by its frank honesty about the same inclusions within Abrahamic lore.

It is a priceless academic text; and all that much more precious to me since it lists four additional works released by the same company that I was not formerly aware of; including one on the Rosy Cross; I intend to edit and release the entire series over time.

112 pages.
Back to News
Use left/right arrows to navigate the slideshow or swipe left/right if using a mobile device