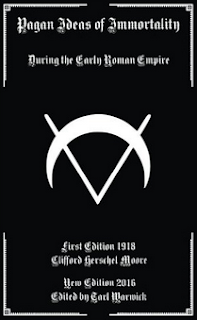 CLICK TO PURCHASE
This work is one of the most dense academic materials I have edited. Written in the early 20th century, it is a historical look at some of the philosophical schools of antiquity and their conception of the afterlife, purgatory, reincarnation, and the nature of the human spirit.

Its details regarding Mithra do not extend to comparisons to Jesus, as was typical in this era. A century ago, such claims would have been taboo. It dwells instead on multiple stories from antiquity (going back before Rome to previous religious schools which later influenced Rome as well) especially with regards to the form of tartarus and so forth. The evolution of the antiquated conception of the immortal soul is revealed here in great detail.

32 pages.
Back to News
Use left/right arrows to navigate the slideshow or swipe left/right if using a mobile device