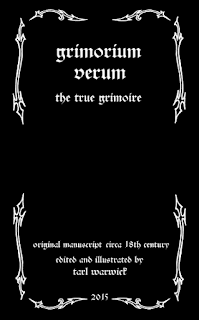 BUY IT ON AMAZON
After some time acquiring new occult materials in order to release editions of yet more grimoires, the first of a half dozen or so works is now complete; the infamous Grimorium Verum, one of the more diabolical works within the sphere of such modest-length occult works from the Renaissance through the early 20th century.

Also known as the "True" grimoire, this specific work contains a strange mix of typical angelic or white workings (numerous allusions to the power of Adonay and other divine or angelic names) as well as a limited amount of astrological material mixed in with several rather dark rituals; one involving animal sacrifice, the other involving the decapitated head of a human being and some beans, used to summon a spirit for divinatory purposes.

The work is fully illustrated and edited; I have removed archaic language and modernized it, with a few exceptions for continuity, and simplified the first three illustrations which apparently serve no purpose except to illuminate the topic at hand, because the three marks (or sigils) given for, respectively, Lucifer, Beelzebub, and Astaroth, are not directly used in any of the summoning herein. The work can be taken as an extremely interesting mixture of traditional and folk magick, or else as a steganographic work which I explain to some depth in the introduction. Strangely at least one other edition has a fifth section tacked onto the end from the OTO, the Book of the Black Serpent, which is of an entirely different occult school and which no serious occultist would consider as having anything to do with Crowley's nonsensical treatment of older traditions. This edition, obviously, omits this and other occasional attempts by the dishonest to cheapen the work. I have also finally corrected the all-too-obvious problem within the human head ritual, which calls for seven black beans but only accounts for five; the solution is simple- the original passage apparently forgets to notify the operator that not one but two beans are to be place in each eye. This otherwise minor oversight would be a severe problem for anyone actually attempting to use the work in a ritual form (I obviously do not condone the attempted use of decapitated human heads in rituals.)
Back to News
Use left/right arrows to navigate the slideshow or swipe left/right if using a mobile device