Fruits of Eden: Herbalism and the Occult NOW AVAILABLE 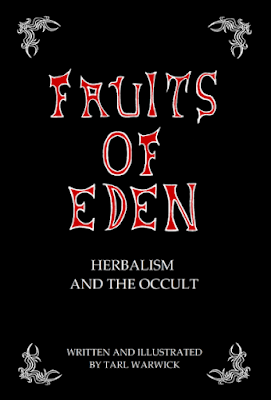 PURCHASE YOUR COPY HERE
After many months, "Fruits of Eden" is now finally available. Last night I finished the last touches on the cover art, and uploaded all the files to Amazon.

The end result I am quite proud of- I never considered myself to be particularly artistically inclined other than in architectural drawing (which came in handy for a few of the illustrations for the charcoaling and garden design chapters of this work) and underestimated my ability to draw botanical works in a way that would be acceptable for a published work.

The book is 240 pages in length, fully illustrated, with a long index at the end for herbal species whether included in the four encyclopedic chapters or not. The work would have been far too long had all species involved with any occult field been included, since virtually any species is either directly or indirectly used in some manner except, perhaps, common clumps of lawn grass.
Thankfully, for the reader, the end result contains virtually the same information as it otherwise would have (I actually added a bit of extra material during my final edit as well) for a fraction of the price as well; the hardcover-only release formerly planned would have been about four times as expensive for just the basic edition, far more for those that were going to be bound in leather. The final touch of pizazz came with the lettering of the front cover- typically I use a font generation system and don't freehand the title letters like I did here.

Anyone interested in botany, how-to occultism, occult history, or pragmatic garden design (involving methods normally not discussed such as charcoal making as a soil amendment process) will probably enjoy this work. I hate to toot my own horn, but a bit of tooting might be called for since it went through three edits with all artwork made by hand and edited for weeks.
Back to News
Use left/right arrows to navigate the slideshow or swipe left/right if using a mobile device