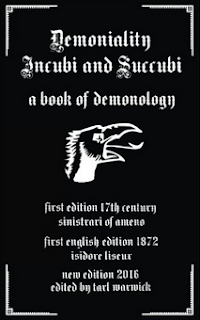 CLICK TO PURCHASE
Now comes the first of at least three works on demonology which I intend to edit and release in the wake of King James' own Demonology; this time, a Catholic rather than Protestant work, which appears to be a rough counterpart to (and at several points a refutation of) the Protestant Demonological tradition.

The text covers, in quite a bit of detail, the nature of incubi and succubi in an elemental and physical sense, their relative status as beings, relates several specific tales of their amorous passion or their violent nature, then proceeds to speak of literal demonic necrophilia in which a corpse has been requisitioned by an incubus for nocturnal purposes; unlike King James' work, which refutes the concept that such unions produced children, Sinistrari believes that they can, and that often the resultant offspring were essentially lesser Nephilim, spawned (as Alexander the Great, Julius Caesar, and others supposedly were) not by mortal man but by "gods" which Sinistrari considers a reference to the demonic. Helpfully, the original author clears up an apparent confusion over whether sex with corpses possessed by demons is a form of bestiality; he claims that it is merely an act of spiritual pollution punishable only by urging repentance- a rather tolerant stance for the era.

In the strangest twist of all, he then claims that demonic entities, at least those of certain types, are actually capable of being killed physically by humans, and of also repenting of their sins and gaining entry to paradise.

Originally a Renaissance work in Latin, Father Sinistrari's Demoniality was translated into English in the 1870s by Isidore Liseux. Liseux' version retained the Latin and contained several lengthy advertisement pages as well as a post-preface ramble on the work which did very little to illuminate it (all of this material I have omitted as useless.)

90 pages.
Back to News
Use left/right arrows to navigate the slideshow or swipe left/right if using a mobile device