Death and the Afterlife: Now Available! 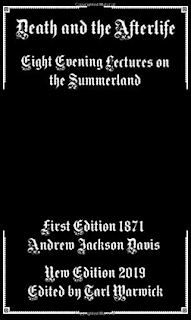 This book is a strange one even by my own standards; it should be duly noted that due to censorship (and the deplatforming raids which have become a hallmark of the last few years) I have redacted a section of the book begrudgingly. You can find the original scans here if you wish and view this taboo knowledge for yourself about the races of mankind.

Andrew Jackson Davis, the author, wrote several works from the perspective of a clairvoyant. In this book he claims to have communicated with spirits and also to have seen the afterlife, which in his visions is rather varied, changeable, and wondrous, with rivers of light and many more wonders. For those intrigued by history it should be noted that this is one of the early works that would later form the backbone of eugenics-era philosophy without itself being eugenic in manner. Such philosophical writings would eventually give rise to the modern world.

166 pages.
Back to News
Use left/right arrows to navigate the slideshow or swipe left/right if using a mobile device