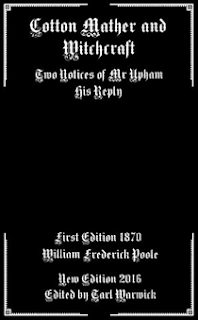 CLICK TO PURCHASE
This short tract is one of the more interesting looks at the Salem Witch Trials that I have seen. Not only does it openly defend Cotton Mather (usually saddled with a significant proportion of the blame for the witch hysteria there) but does so with enough persuasion that over a century after its authorship I found myself at least partly convinced that perhaps Mather really wasn't the devilish sadist he's usually considered. It helps that he arguably outflanked Gregor Mendel in a basic understanding of rudimentary genetics by a century.

Mather, of course, was a pious puritan of his age- but he was also a relatively scientific man with an extreme level of education. This work, then, exonerates him from some of the criticism he began receiving in this mid 19th century era, as rationalists sought to universally condemn virtually all specifically religious minds of the past age. It gives a little bit of insight into the concept of the "white specter" and similar paranormal topics as well.

24 pages.
Back to News
Use left/right arrows to navigate the slideshow or swipe left/right if using a mobile device