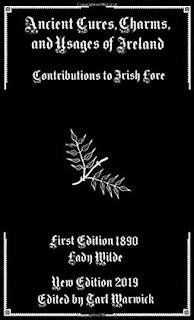 CLICK TO PURCHASE
This particular book is an interesting combination of work that delves into folklore, civics, and what might be considered, beyond the strictly folkloric, spook stories, some of which are fairly fantastical in nature. Crafted at the end of the 19th century, it encourages the invasion of Ireland by the United States to liberate the island from British tyranny, and at great length condemns the English almost in entirety.

For occult purposes the lore of interest here is threefold; first, a treatment of simple remedies, often herbal or in the form of Christianized incantations. Second, fairy lore, significant in bulk. Third, folk stories involving both the dead and witches in a great deal of sometimes quite morbid detail. I must admit several of the stories about dead brides were bizarre even by my standards. It caps itself off with a nice little series of proverbs, which are sometimes religious.

186 pages.
Back to News
Use left/right arrows to navigate the slideshow or swipe left/right if using a mobile device