All About Devils: Now Available! 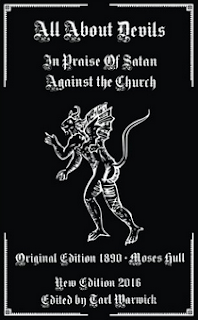 CLICK TO PURCHASE
This strange work is a spiritualist writing from the late 1800s. Moses Hull was once a fairly well regarded Adventist minister but lost his faith, embraced the occult, and proceeded to write this little booklet, which is almost a tract of demonolatry for its era.

Short in length but deep in detail, it excoriates and lambastes the church, applauds Satan as a herald of wisdom (and at times as better in a strategic sense than the christian deity) and (correctly) predicts that the christian cult would take credit for the philosophical advances of spiritualism. Indeed, this latter prediction is so accurate that we might regard Hull as a sort of spiritualist prophet- the church, decades later, would indeed embrace the struggles of the suffragettes, the return of neopagan iconography, the study of the arcane, and other things which were embraced by the Victorian occult movement while the christian body largely regarded them as heretical. To Hull, predicting this, it would roughly equate to the christian church once chastising proto-scientists in their claim that the world was round and went around the sun in orbit.

44 pages.
Back to News
Use left/right arrows to navigate the slideshow or swipe left/right if using a mobile device