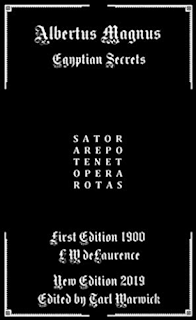 CLICK TO PURCHASE
At long last I was able to get a copy of this work (published by deLaurence at the dawn of the 20th century) that was in workable condition. At over 230 pages in length it is a full grimoire initially in three volumes which were first available in the early 18th century in German. Borrowing heavily from the Petit Albert and in the same tradition and lineage as Hohmans' Pow Wows, it is comprised of two distinct types of material; that which is technically mundane (folk medicine mostly, but also some husbandry related entries) and that which is truly spiritual (prayers and, in a couple spots, incantations involving literal demons.) Wherever "t t t" appears it is assumed the reader ought to be making the sign of the cross.

The staggering number of actual entries here is only eclipsed by the strange content of some of the passages: Ever wonder how to prevent yourself from continuing to be infatuated by a woman lustfully? This book has a solution: Just work up a good sweat and drink some beer from your sweaty shoe. Rub some bat lard in your eyes to see in the dark and amaze your friends!

I attempted to correct some of the obvious spelling errors in the work especially in volume I, however since the initial deLaurence edition is essentially a translated reworking already I felt it necessary to leave the somewhat jolting flow alone.

233 pages.
Back to News
Use left/right arrows to navigate the slideshow or swipe left/right if using a mobile device